Brad Wilby had a true passion for soccer and great appreciation for nature and the outdoors. Brad was the assistant soccer coach at Hobart College.

Brad was a 2004 graduate of Plymouth State University, where he played goalie for the Panthers soccer team. He was All-New England first team and was the recipient of the Plymouth State Paul E. Arnold Varsity Club Male Athlete of the Year Award.

Brad Wilby was a member of Haddonfield SC.

The Brad Wilby Memorial award recipient for 2022 is Joey Lomas.

My name is Joey Lomas. I am a senior at Sterling High School and a member of the National Honor Society, this year’s treasurer. I started playing soccer when I was five for Highland Youth Soccer and then eventually played for Tarkill both South Jersey Soccer Leagues. I played soccer, track, and baseball for four years. I was the goalie for the past two seasons on my varsity team after our goalie went down with a season ending injury two years ago. This past season our soccer team won the Colonial Conference. We also were invited to play in the coach’s tournament and made it to the semifinals. I was named First Team All-Conference, 2nd Team All South Jersey Goalie, 2nd Team All State Goalie. I was named MVP of my team by my teammates. I also, broke the school’s consecutive shutout record with thirteen shutouts. I have also been Student of the Month, Named the Senior Spotlight, and received the honor by my superintendent for the “Me to Be You” Award. I finished high school with a 97.844 GPA and had perfect attendance for my four years of high school. In college I plan to major in physical education and also would like to coach. Someday, I would like to be an athletic director. I work at Tall Pines Day Camp as a lifeguard and have been there since I was four years old. I also am a member at Holy Trinity Lutheran Church. 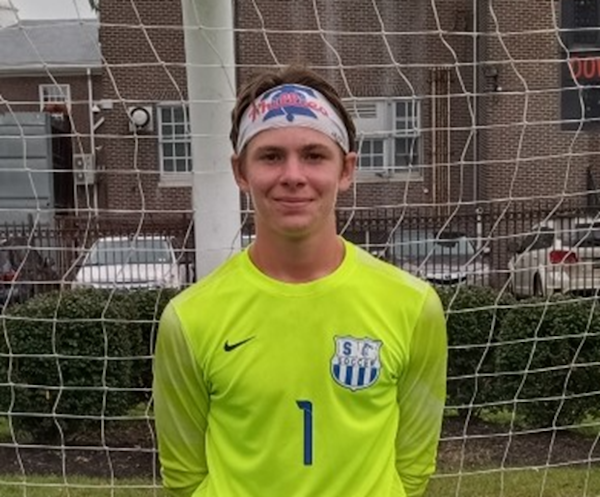 He was also President of the S.J. Soccer Hall of Fame

Charlie served as the assistant coach of Eastern HS Soccer and many youth and adult soccer leagues in the S.J. area.

The Charles "Charlie" Kellogg award recipient for 2022 is Joey Garrett.

My name is Joey Garrett and I am a graduating senior at Gateway Regional High School. I have been playing in the SJSL since I was seven years old through this past spring season. For many years I competed with the Deptford Sharks where I made both friends and fond memories. In high school I played varsity for three years and was captain for two of them. I was also selected to be on the first team all-conference for both my Junior and Senior years and participated in the first team, all-conference Senior Match. I have been selected by my coaches to attend multiple sportsmanship banquets and received the NJSIAA Scholar-Athlete award from my high school. I am the founder of Gateway’s club, the Fellowship of Christian Athletes (FCA), where I have led events from weekly huddles to school-wide volleyball tournaments. I am also an NHS officer, top four in my class, and captain of both the Indoor Track and Tennis teams at Gateway. In the fall I will be attending Rowan University for Civil Engineering where I plan to continue my soccer career. I would like to thank the SJSL organization for not only selecting me for this award but also for giving me the many happy memories and matches over the years. Paul was a member of the Westmont Soccer Club and Haddon Twp. HS Soccer Team and Valedictorian of the Class of 2001. He was also a National Merit Scholar and a Bloustein Scholar. Paul captained the varsity soccer, basketball, and baseball teams, earning 10 varsity letters at Haddon Twp.

At Harvard, he played three years of JV soccer and was the first-ever Harvard University Intramural Athlete of the Year in 2004.

Paul died in a tragic accident in New York City on June 24, 2005, only two weeks after graduating from Harvard.

My name is Drew Gollihur, and I competed in the South Jersey Soccer League every year since second grade. I played mostly for my hometown, Hammonton, but played multiple seasons for both Voorhees and Deptford during later years. Aside from the SJSL, I was successful in completing my goal to become an accomplished student, athlete, and community member. Academically, I placed 7th in my class of 319. Athletically, I earned three varsity letters for volleyball and two varsity letters for soccer. During my senior year, our teams broke school records for most wins in a season for each sport. In addition to athletics, I was active in the performing arts. I sang in the Select Choir all four years and played multiple lead roles in various musical productions. As a member of the National Honor Society, I began volunteering at local festivals, tutoring my peers at Hammonton High School, working at our local food bank, and recruiting blood donors for the American Red Cross. I will be attending Rowan University this fall, majoring in Mathematics.